This guide will show referees how to view team line-ups and make changes to them on COMET Football app.

Each club should select and confirm their team line-up by the deadline set by the competition organiser.

When both clubs have confirmed their team, the Competition Manager, Referee and both clubs will receive an email including a copy of the team sheet.

The referee is able to see the team line-up on the Home and Away screens of the app before and after the line-ups have been confirmed.

After a club has confirmed their line-up they are no longer able to make any changes, so may ask the referee to do this in case of a mistake or an event that calls for a change, e.g. an injury in the warm-up.

This guide will show you where to see the line up and how to make changes on the COMET Football app.

To look at a match, tap the match in the Upcoming matches list.

On the match screen you can access the team line-ups by tapping Home or Away at the top of the screen.

In this example, you can see the away team.  You can see that the team line-up has been Confirmed by the club in the box at the bottom of the screen, along wiith the time of confirmation and the person who confirmed the line-up.

If the line-up was not yet confirmed, the box would say Set to Confirmed.  If a club is having a problem with confirming a line-up, you can do it on their behalf by tapping the Set to Confirmed box.  Please note, the club will have to have selected the minimum number of players, a captain, goal keeper and at least one coach to be able to confirm their line-up. 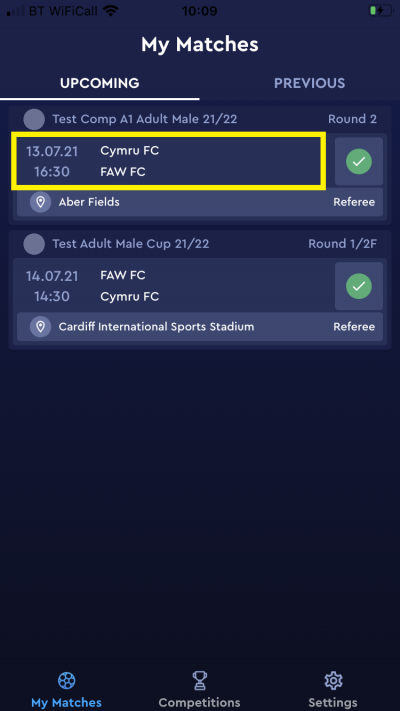 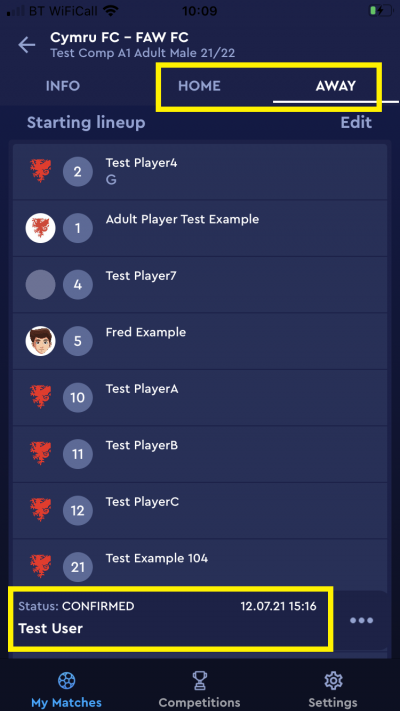 Making a change to a team line-up

After a club has Confirmed their team line-up they are no longer able to make any changes.

If a mistake has been made or something happens that means a club need to make a change, e.g. an injury during the warm up, the club may ask the referee to make the change.

To do this, tap Edit in the relevant team tab.

Then, in the Line-up lst, tap the name of the player who needs to be removed from the line-up. 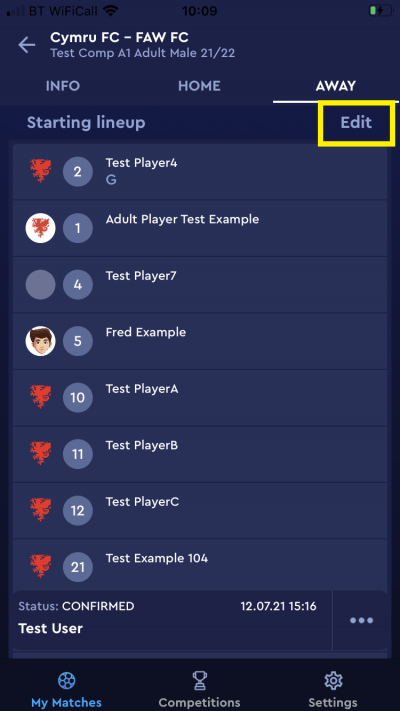 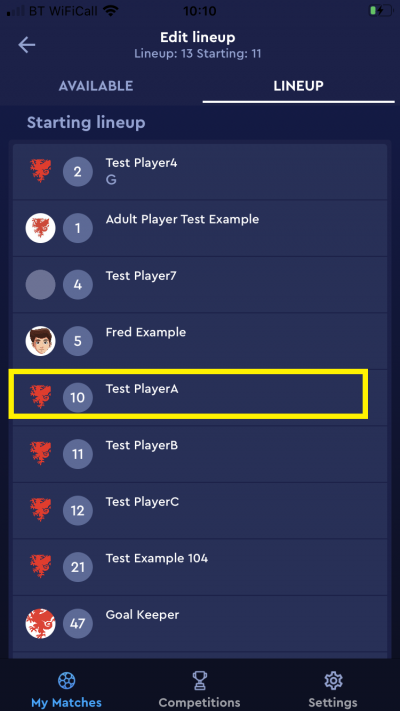 To remove the player from the line-up tap Remove.

They will then be taken out of the team line-up and be shown again in the Avaliable players list. 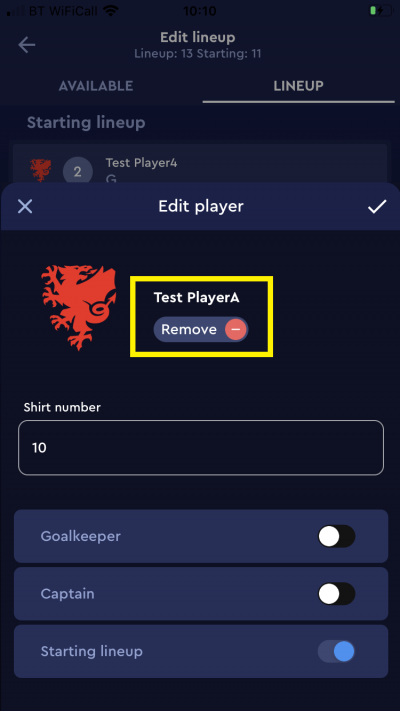 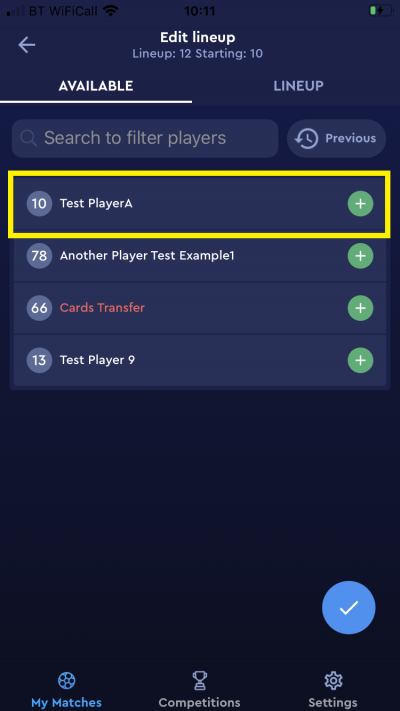 SL should be highlighted in blue if the player is to be added into the starting line-up.

If they need to be added as Captain tap CP to highlight it in blue, or tap GK to add the player as a Goal keeper.

Too add the player to the line-up tap the tick. 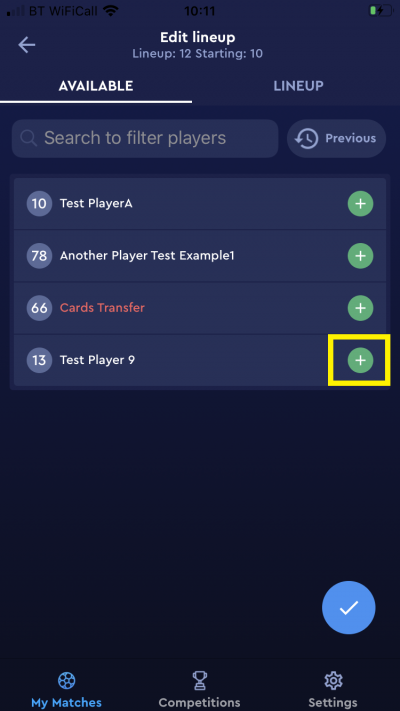 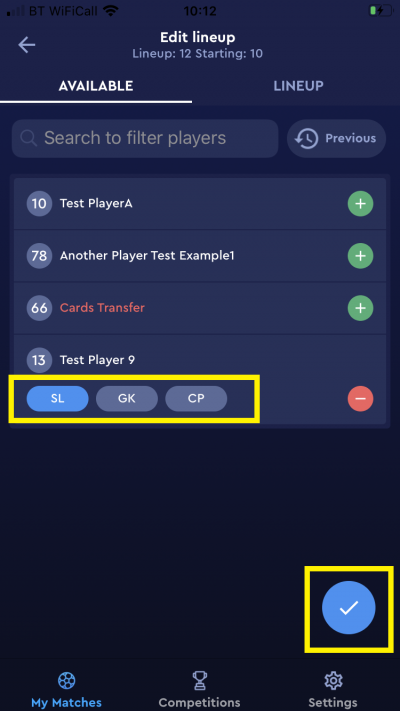 You will now be able to see the new player listed in the Lineup tab. 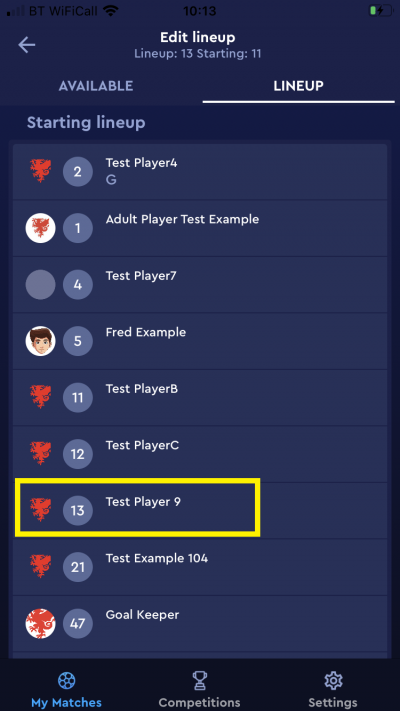