This guide will show you how to select a team line-up on the COMET Football app.

Each club should select their own team on COMET.

When you log into the COMET Football app, your home screen will show the list of your clubs upcoming matches.  Tap a match to access the match screen.

On the match page, tap Home or Away depending on whether you are the home or away team, to begin selecting your team line-up. 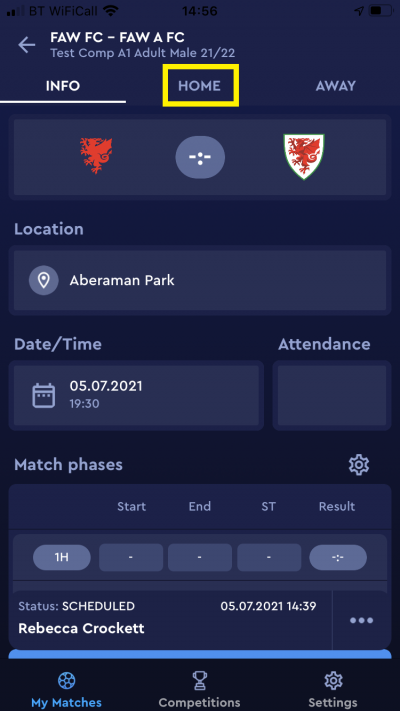 Next tap Add next to Starting lineup. 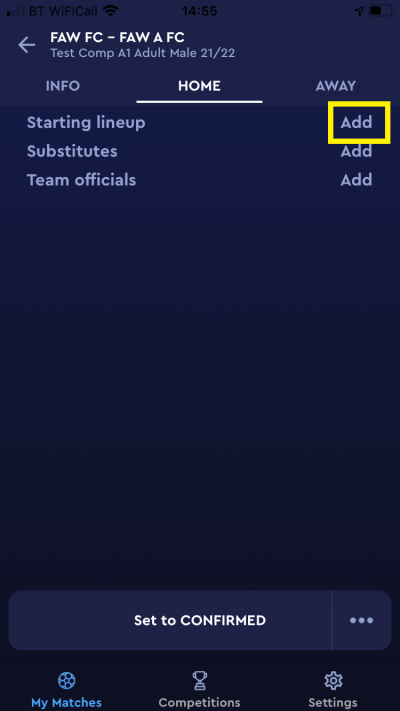 You will then see a list of your Available players.

To select a player, tap the + (plus) sign next to the players name. 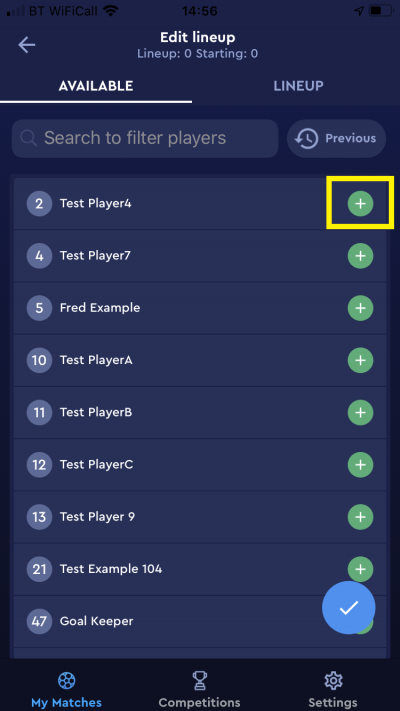 When selecting a starting player the SL button should be highlighted in blue.

You can tap the SL button to remove the blue if you want to select that player on the bench as a substitute. 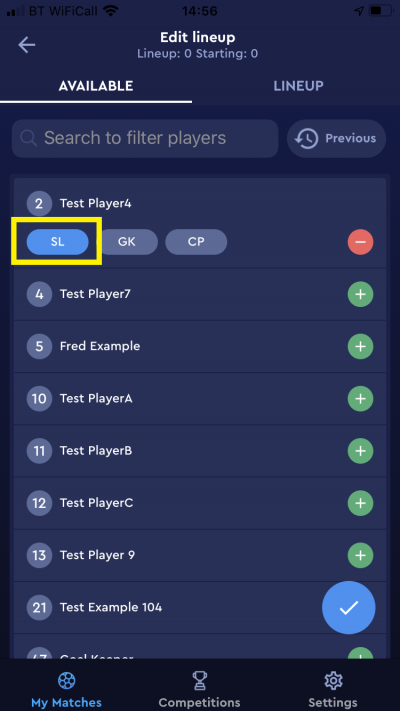 To select a captain, tap the + sign on the player, then tap the CP button, which will turn blue.

You must have selected a captain to be able to confirm a team line-up. 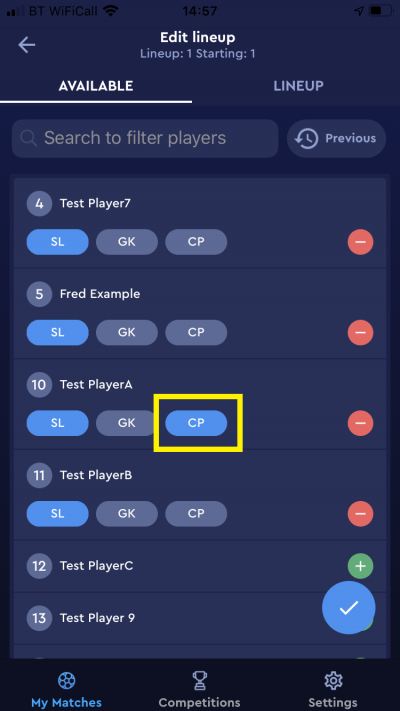 To select a goal keeper, tap the + sign on the player, then tap the GK button, which will turn blue.

You must have selected a goal keeper to be able to confirm a team line-up. 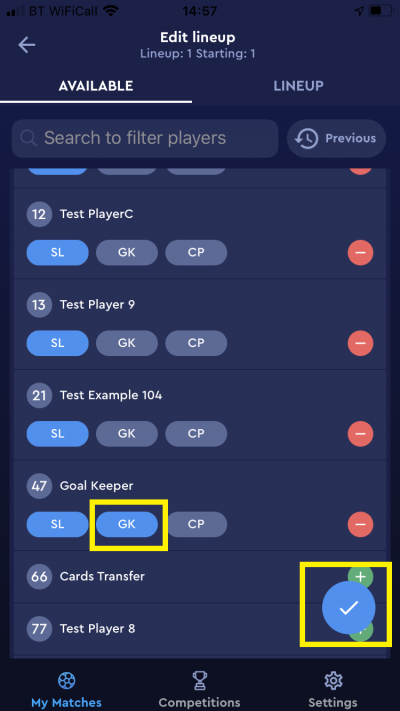 When you have selected your starting players, tap the tick to transfer these to the line-up.

Please note - you will need to confirm the team line-up when it is complete, please see details at the end of this user guide.

You can select substitute players in two ways.

Firstly, when selecting a starting line-up you can tap the SL button to un-highlight it (so it is showing in grey) when adding a player as shown below. 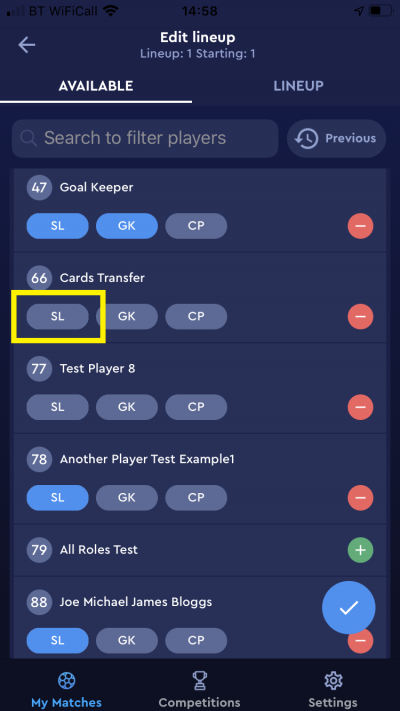 Alternatively, you can return to the team tab (Home or Away), and tap Add next to Substitutions, then add players from the Available players list in the same way as you added the starting line-up, by tapping the + next to the players name, then the tick when all players are selected. 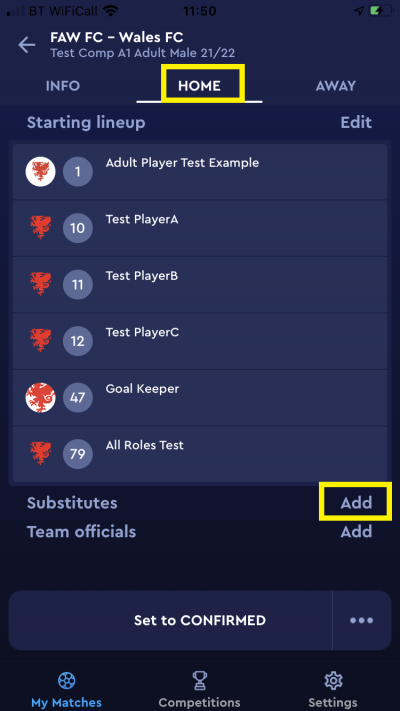 Adding coaches or officials to a line-up is a similar process.

You must add at least one team official to be able to confirm a team line-up.

In the Home or Away tab, tap Add next to Team officials. 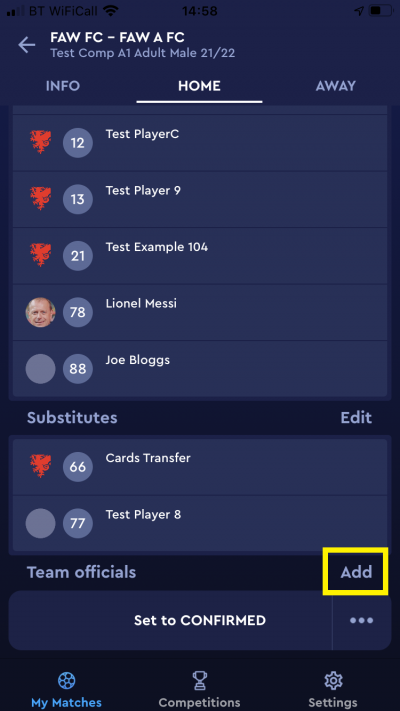 To add the Team Manager tap the + (plus) sign next to Unassigned. 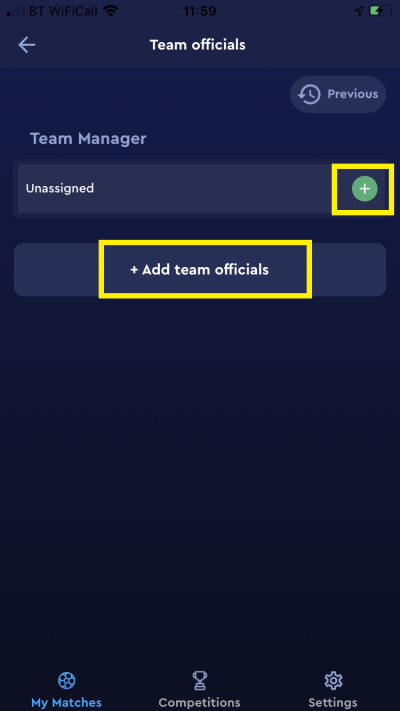 Tap the + sign next to the role you want to add to the line-up. 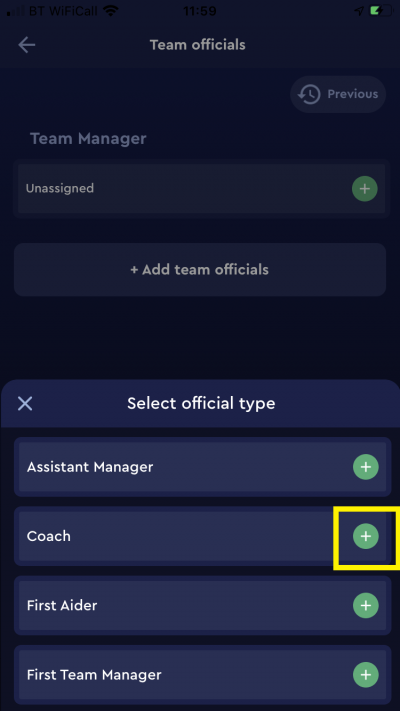 You will then see a list of people registered at your club in this role in the age category of the competition.

Tap the name of the coach or official to add them to the line-up. 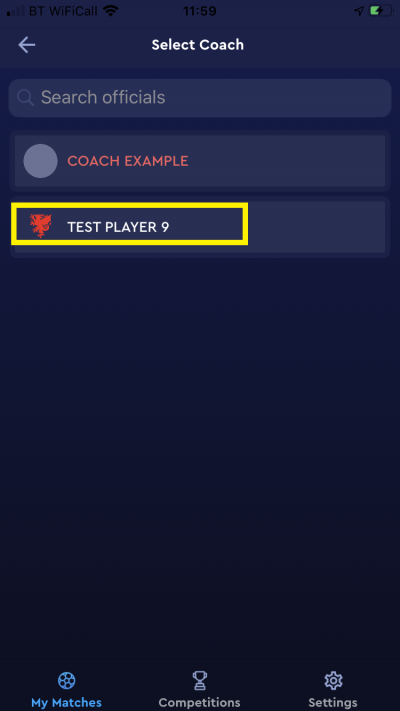 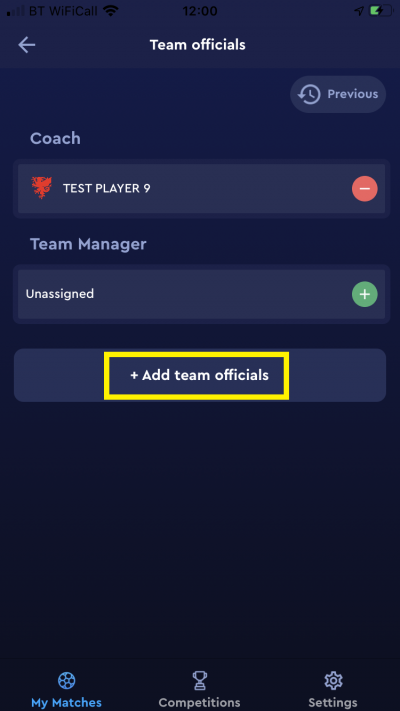 To save time when selecting a team, you can copy the team from the last match.

To do this, after clicking Add next to Starting lineup, on the list of Available players tap the Previous button. 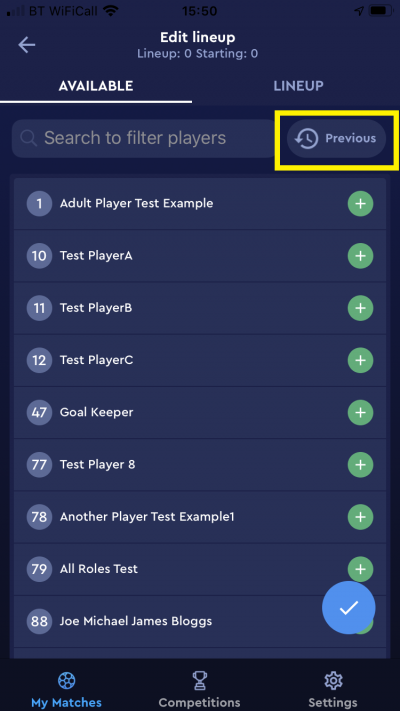 This will then add all players who were selected in the previous match, except those who have since become ineligible to play due to a sanction or fine.

Tap the tick to transfer the players to the team line-up. 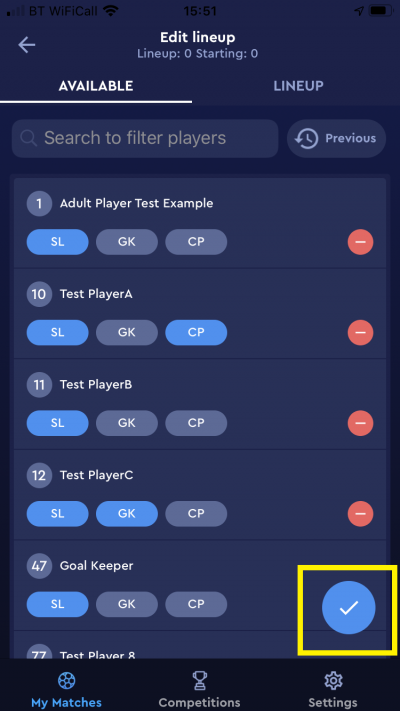 Only players and coaches who have a Confirmed regstration with your club, and come within the age parameters of the competition (players) or are registered in the competition age category (coaches) will show as available to be selected on the team sheet.

If a player or coach is ineligible for selection, due to being suspended or having an outstanding monetary fine or unpaid player membership, they will show in red on the app and you will not be able to select them in a team line-up.

If you tap a player or coach in red to try to select them, you will get an error message stating the reason that they are ineligible. 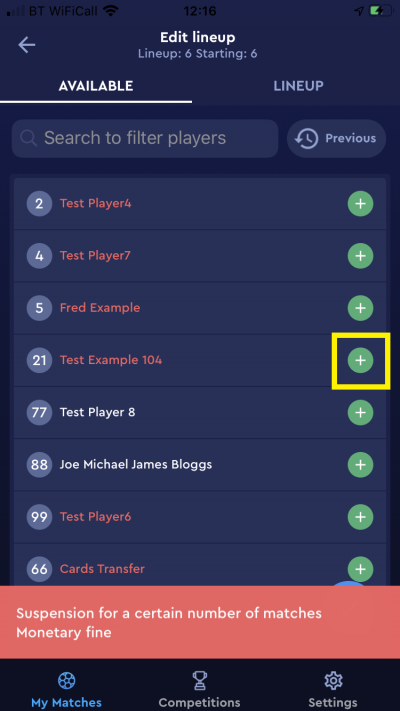 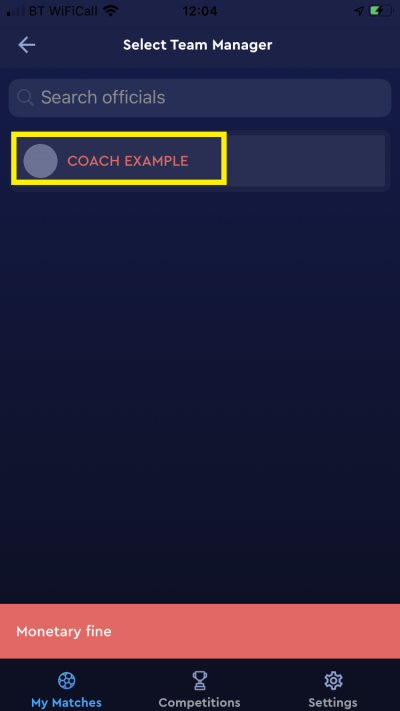 Making changes to a team line-up

Club users can make changes to the team line-up up to the point that they confirm the line-up.

You could for example select a line-up the day before, or before travelling to the match, and can then make changes on arrival at the match venue before confirming.

Please note, once a line-up is Confirmed club users cannot make any changes, but the Referee can assist with this in the case of a late change being needed, e.g. if someone is injured during the warm up.

To make changes to a line-up before it is confirmed, tap Edit in your team (Home or Away) tab. 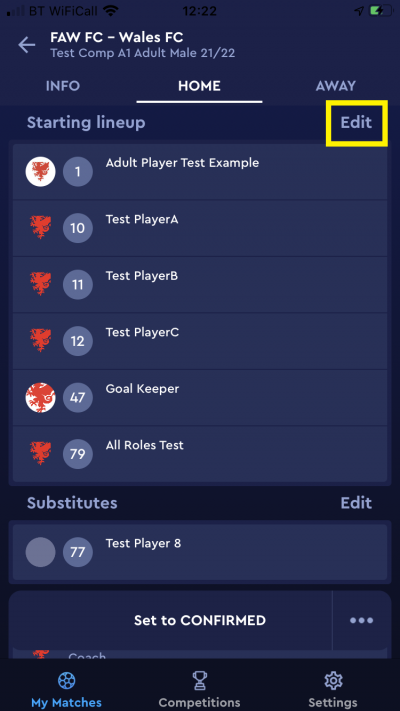 Next tap Lineup to see the starting players, substitutes and coaches you have already selected. 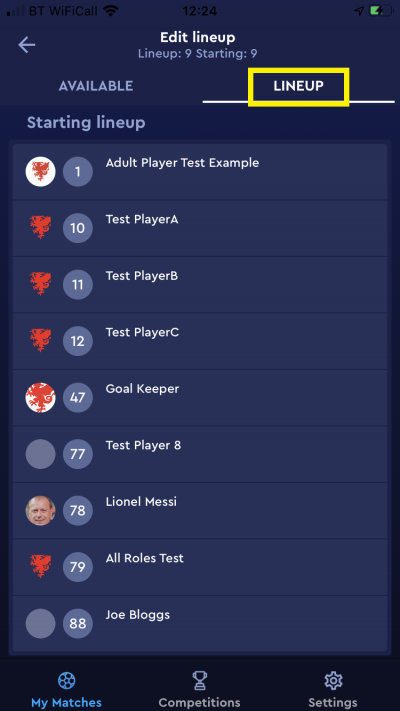 Tap a player name to edit that players details.

In this example, I have made the player captain, by sliding the Captain slider to the right. 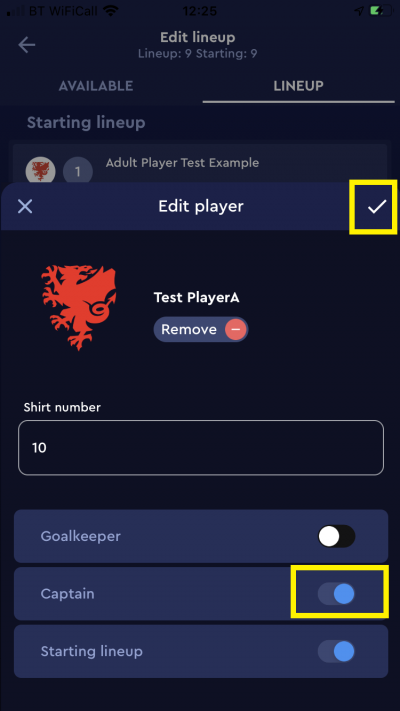 You can also totally remove a player from the line-up by tapping Remove.  This takes them out of the line-up and returns them to the Available players list. 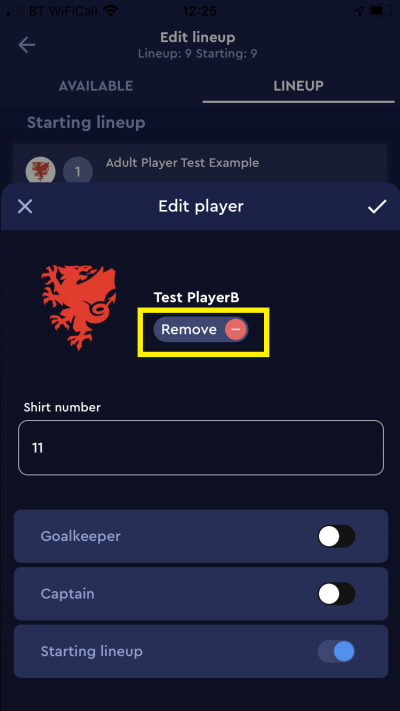 When you are happy that the line-up is complete, you should Confirm the team line-up.  Remember, a team line-up must include a captain and goal keeper, at least the minimum number of players allowed in the competition rules, and at least one coach or team official, or you will not be able to confirm it.

Clubs should confirm the line-up by the deadline set by the competition organiser.

When both team line-ups are confirmed, an email is sent to both clubs, the referee and the competition manager, which includes a PDF copy of the team sheet.  Clubs can also now view each others teams in the app or web version of COMET.

Please note - club users cannot edit a line-up after it has been confirmed, so please make sure the line-up is complete before confirming it.

To Confirm the line-up tap Set to CONFIRMED on the team (Home or Away) tab. 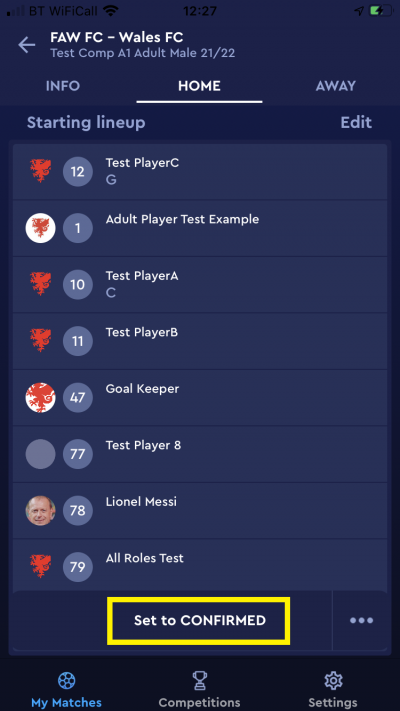 Next, tap the tick next to Change Line-up Status.

You do not need to type anything into the enter reason/description box. 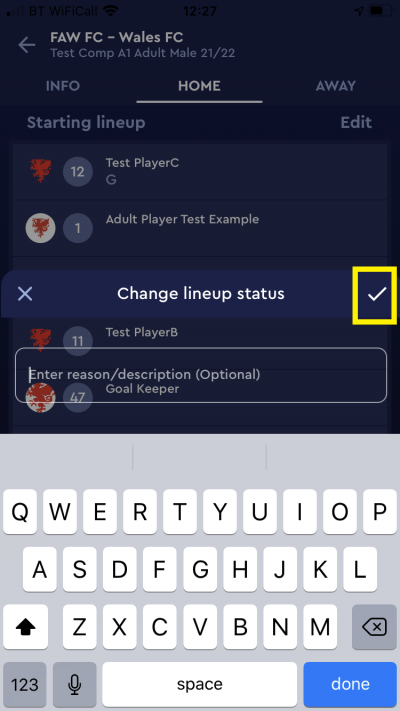 The line-up will then show as Confirmed and include the time and name of the person that confirmed the line-up. 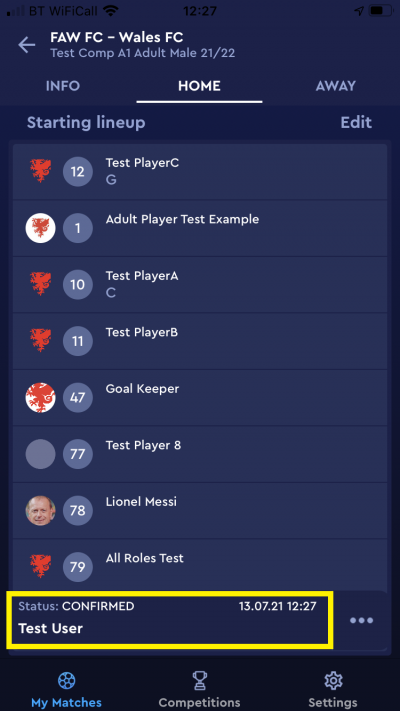